The Real Power of College Swimming

Madison just left our team to swim at Rice University. She texted last week the following, “I’m really excited about the swimming here. I think it’s the perfect fit and I love working out. On the other hand I am getting less and less confident about having success in my classes. All these people are Alan Jabri (a teammate of hers here at North Bay Aquatics who was a recent National Merit Scholar – now at Princeton) and know what they want! Ahg…

This was our reply.

“The team will get you through school. Be honest about your concerns, so they can help you. That’s part of why they are there – to help. I (Don Swartz) nearly flunked out in the fall of my freshman year (Middlebury College). Everyone was so smart and competitive in the classroom. But I hung in there and actually figured out how to do it. The process of figuring it out was the biggest thing college did for me – easily the biggest. You are a successful person. You proved that in your swimming. Success crosses many fields, including academics.”

Posted by Don Swartz & Ken DeMont at 9:16 PM No comments: 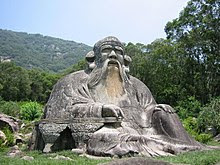 A stone sculpture of Laozi, located north of Quanzhou at the foot of Mount Qingyuan

As we begin our new season, the one leading up to the Olympic Trials in Omaha in 2012 where the Olympic Team for London will be chosen we consider this quote attributed to Lao Tzu,

Every time we begin anew, it is imperative to give ourselves a chance to really grow into what we can become. A certain part of that process requires that we let go of the past paradigms such that we can find new “truths” about what is “real” for us.

This applies to coaches as well as swimmers and includes parents. We encourage each of you to carefully assess what is “true” about your role in the process of helping others attain their goals, fulfill their dreams.

There are swimmers today that no one is considering who will make the 2012 Olympic Team. It happens every four years. Likewise, there are swimmers and coaches and parents who will leap ahead in their respective roles this year making a tremendous difference in the lives they touch.

Be one of them.

Posted by Don Swartz & Ken DeMont at 6:49 PM No comments:

Every now and then we ponder the question of what is more important for a competitive swimmer, training or racing?

At first glance it seems obvious that each is very important and that without one the other has very little meaning. Upon further reflection we believe that racing is actually much more important than training.

In terms of competitive sports we cannot think of a sport where this is not the case. Games, matches, races – it matters not what the sport is, what counts in competitive action is the competition.

Without competition, there is no feedback on the training being performed. An athlete might be in excellent condition but without the race or game she doesn’t have any way to measure the effectiveness of her training.

He might be training wonderfully but his skills may not be useful for the competition. How often can a quarterback throw passes in practice but when in the game, the speed of the action confuses him and his passes are no longer accurate.

We just finished our summer of swim racing and had many excellent competitive efforts. We also had some that fell short of the mark, especially when compared to the training we had seen. So obviously we as coaches and they as swimmers missed something. Without the meet at the end when everything was “on the line”, we would have not known that we were missing our target.

This is not a bad thing by any means. It is very valuable since none of the swimmers in question had their final career swim last week. The learning continues and the opportunities for redemption are there for the taking. It is up to the coaches and the athletes to work together with honest assessment on both sides with the common goal being resolution of the shortcomings.

There is a continuous loop running; training, race, evaluate. You can step into the cycle at either the training or racing step but evaluation cannot take place without the racing.

One could almost make the case that a swimmer would be better served racing 20 days a month and training 2 or 3 days a month…though we don’t think that will ever happen. What we did learn this summer from some of our college swimmers was that they believe they didn’t race nearly enough after their college season ended, in either February or March. Many waited until late June to race and they all said it was a mistake.

Maybe a better cycle would be to train for 3 or 4 days, rest a day, then race for a day…sounds like the NFL. The NBA plays 82 games without half as many practices once the season begins. MLB plays 162 games with virtually no workouts.

So, what do you think? How often should a swimmer race? What kind of ratio would be most beneficial when you consider training vs. racing?

And, do you think a non-competitive swimmer would benefit by entering a race now and then, either in the pool or open water? Let us know and have a great finish to your summer!

Posted by Don Swartz & Ken DeMont at 7:08 PM No comments:

The Value of One More Race

Here’s a little snap shot from the end of this summer’s racing season that tells a big story. It comes from JD who is a breaststroker from our North Bay Aquatics club team who also swims at the University of Arizona.

JD had knee surgery this last college season which meant he red-shirted his most recent season. It is tough to sit on the sidelines watching your teammates move forward while you wait for your body to heal. Ask anyone who has had to go through this process and they will tell you it is far more difficult than any training regimen they have had to endure. Athletes love to work out and compete. It is in their “blood” and when they must sit they tend to go a little crazy.

And then they must get back into the flow. The reactions to re-entry are as varied as the individuals themselves. We can tell you that JD was grateful to be back training. This summer he had a few races but nothing compared to the normal cycle he would have had but for the injury.

He figured he would go to a couple of meets then qualify for Summer Nationals and everything would be back to normal. Except that it didn’t go exactly like that.

He struggled with his racing, trying to find rhythm, pacing, tempo and his place in the pool in general. He was unsuccessful in getting his qualifying time. He went to an extra meet, our California Sectional meet, for another chance but still fell short. But the maddening part wasn’t so much the time he swam but the lack of “feel” in the races.

So…he went to one more meet. This one was the same weekend as Nationals so the level of competition was not as high as the previous meets. But it was still a chance to get up on the blocks and go racing, to work out the kinks.

The following are his texts after swimming his final 100 breaststroke of the summer.

“1:06 at night (in the finals). Came back much better - in terms of time, flow- than I did any other meet this summer. (We said we knew racing this one last time in a meet of no real significance would pay big dividends down the road) Yeah, I agree. Tonight was the first time this summer that I hit a second gear. I think what was most lacking in my summer was racing before I had to shave. Tonight was extremely valuable in setting me up for the fall season (meaning his collegiate season).”

So we say big CONGRATULATIONS to JD for sticking to it, working through it and having the inner strength to keep his resolve. This is an obvious life lesson we all would do well to remember. Thanks for sharing JD. We appreciate you a ton!

Posted by Don Swartz & Ken DeMont at 6:44 PM No comments: