And What Today’s Youth Need is…


Definition of resilience
1: the capability of a strained body to recover its size and shape after deformation caused especially by compressive stress
2: an ability to recover from or adjust easily to misfortune or change
(Also resiliency)

·       1The capacity to recover quickly from difficulties; toughness.
·       2The ability of a substance or object to spring back into shape; elasticity.

We were talking with a college coach 2 weeks ago advocating for one of our swimmers. After the usual conversation we asked what he thought the differences – if any – were in this generation of high schoolers compared to those that had come before. He replied that the main thing he sees is that kids today lack the resiliency of those even a decade ago, let alone several decades ago.

He observed that pretty much every person who comes in as a freshman will, over the course of 4 years, face any number of challenges as they adjust to life on their own…academically, socially, athletically…you name it and they will be challenged, multiple times. He said he thinks today’s young people lack resiliency, especially when compared to those who have come before.

We talked a bit about how this happens discussing all the usual things…parents who do too much, coaches who do too much, thus robbing the youngster of the opportunity to grow by becoming resilient while still relatively safe in their local environs.

Failure fixed by others leaves you weakened; mistakes you overcome on your own empower you.

More thoughts on culture; how to create yours and sustain it over time. In a recent Thought of the Day from ASCA this idea from Coach Kinel resonated, very simple and yet profound.

Then we saw this sign at the pool at Drake High School in San Anselmo, CA. More than one person put some real thought into this. It ties into itself very nicely on several levels. 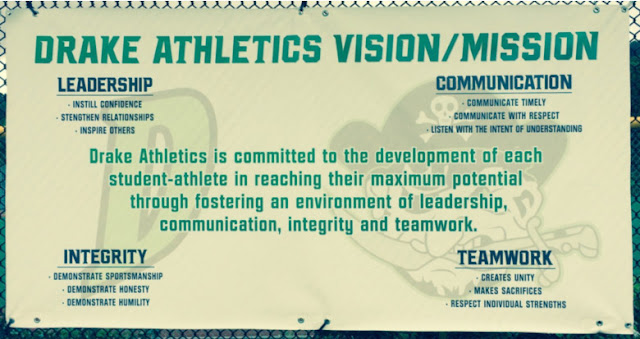 So what’s your sign look like? Does it accurately portray your message? Do you have it on bag tags or kick boards? Do you talk about it regularly with your team? All athletes, coaches and parents are affected by this type of cultural reminder. Make sure everyone can see it and knows the origins and recent examples.