Keep The Love-Light On 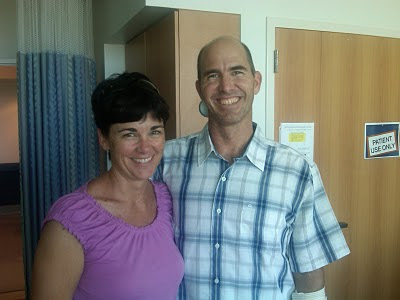 Every now and then we MUST look to a greater power for strength.

Today that power is John Caughlin.

On Saturday September 3rd John participated in the Annual Maui Channel Swim. Instead of being a part of the numerous relays he decided this year he would give it a go solo. He made all the usual sacrifices to get himself ready. And was he ready! Many of his friends and fellow swimmers were going with him – spiritually. Some of you who read this blog are already open water compatriots of John’s – even though you perhaps have never met him. Some of you have swum the English Channel. Some of you have swum in the Sea of Cortez, or the Gulf of the Farallons.

Suffice it to say that all long distance open water swimmers share many bonds.

John was about 200 yards from shore and the finish when he made a defensive move to protect himself from a power boat, raising his arms to protect his head. As a result of the collision John suffered life changing injuries to both arms. His right arm was amputated above his elbow and he lost the thumb and forefinger on his left hand.

The lingering image from that tragedy is seen in his picture…what a smile of inspiration! Make certain that smile is indelibly etched in your memory forever. Next time you think you are having a tough day remember John’s smile. That’s all you need to keep moving forward. It is actually that simple.

John and his sister Jennifer (at his side in the picture) arrived in Southern California on Saturday the 17th of September. John is spending some time with his family at the address above.

His words…”I had my swim and then I had an accident. I will come back sooner than later and finish the swim.” Awesome attitude doesn’t really capture the power of John Caughlin.

Before email, text and twitter there was snail mail. It still works today. Maybe send John a note, card, flowers, something…let him know you are with him…we are certain you will make a difference in his life just as he has in yours.

Be grateful when you go in the water this week…

How about updates for those of us who were there that tragic Maui day. We have written him, we care about him, we continue to hold him in our light. We can't possibly understand his new life challanges, but wish to hear how he's doing.

How about updates for those of us who were there that tragic Maui day. We have written him, we care about him, we continue to hold him in our light. We can't possibly understand his new life challanges, but wish to hear how he's doing.